Our Veggie Fest website team enjoyed sitting down with Kadek Supartini, executive chef of Manna Kitchen, LLC, as well as its owners, Shanti and Markus Schramm, in early 2020. Although most of our interviews happen over the phone, we joined them in their beautiful, new restaurant, mainly as an excuse to eat!

Located in the western suburbs of Chicago, Manna Kitchen, LLC is currently the first plant-based restaurant in the area, serving a population of foodies—many of whom are vegetarians and vegans, but not everyone. “We get all kinds of people walk through our doors who are just curious. They want to know what a plant-based diet tastes like, and we love to amaze them,” observed Markus, who shares ownership of the restaurant with his wife, Shanti.

When seeking a chef for their restaurant, Shanti and Markus were thrilled to find Kadek who, at the time, resided in New York. She was raised in Bali, Indonesia and studied at the Institute of Culinary Education in New York City. Kadek inherited her love for cooking from her mother and remembers her father’s thriving garden as inspiring her love for fresh fruits and vegetables.

“Food has been at the center of everything I do,” Kadek said, recalling how she even put herself through school by cooking and selling meals to her classmates who were thrilled to purchase healthy and delicious, home-cooked food.

Together, Shanti and Kadek co-created a menu that celebrates different ethnic cuisines. “We call it plant-based comfort food,” Shanti explained. One of the menu’s favorites is Chana Masala Tofu Bowl which Shanti recalls being a childhood favorite in her own Canadian home in Vancouver.

Markus explained that his favorite item on the menu is described as the ultimate Bavarian treat! “I grew up in Germany and love this vegan Schnitzel. It’s our version of a national favorite. We serve it with German potato salad and get rave reviews.” The menu even claims that after trying the schnitzel, “Your taste buds will yodel with delight.”

When we asked Kadek about her favorite meal on the menu, she replied, “Whatever I am cooking next—whatever new recipe I’m perfecting in the kitchen—that’s my favorite.” The “Specials menu” that changes daily and weekly is a tribute to Kadek’s inspiration and joy of cooking. “There’s not one cuisine I love over another,” she shared. “I just like trying new things and making my friends and customers happy with the food I prepare.”

Kadek also shared that as long as she can remember, she’s been able to make unique dishes from just a handful of ingredients. “It’s the way my mind works,” she said. “I don’t know where it comes from, but I just close my eyes and invent recipes from whatever foods and herbs I have. Being a chef seems to be in my destiny. Even when I’ve tried to learn another trade, I’ve always returned to the kitchen. It’s where I feel calm and at peace. Some people may get nervous or anxious when they have to cook, but I become focused and calm.”

Kadek has a young kitchen staff at Manna Kitchen and enjoys teaching them the art of cooking. “I instruct them to stay peaceful and loving because our thoughts and vibrations are transferred into the food we create.” At Manna Kitchen, Kadek says, she and the owners—Shanti and Markus—want every customer to feel that calm and joy when they dine at their newly opened restaurant.

Join Kadek on Saturday, February 22nd, 2020 at the Science of Spirituality International Meditation Center (4105 Naperville Road, Lisle, IL) at 1pm where she will demonstrate how to make Gochuchang (glazed tofu and tempeh), followed by Kolak, a plantain and yam dessert with coconut cream. 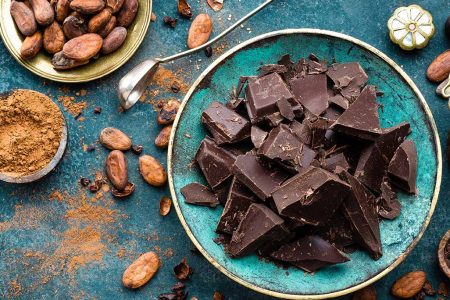 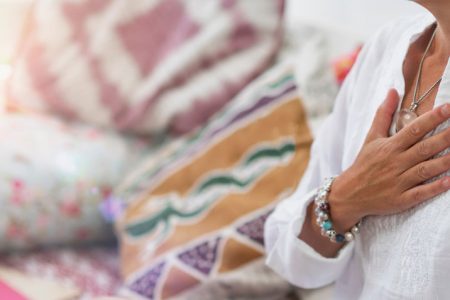