What memories do you have of your father? What influence did he have on your life and how you raise your children?

Remembering my father and the impact he had on my life brings a smile to my face. He was a simple man who loved to read, especially history. He instilled in me the love of books, taking me to the library when I was old enough to read on my own. Like many fathers, mine worked hard to support his mother and siblings after his own father (my grandfather) was unable to work due to an illness. When my father had his own family, he put in long days at the factory where he was a tool and die-maker. I remember that on Sundays during the summer, my mother cooked him up a special dinner and took it to him so that he could have a hot meal for his lunch break. We would deliver it to him together, and I will never forget his appreciative smile.

When I got married, he walked me down the aisle in the one suit he wore to important occasions, wedding or funeral. My father, a shy man, was shaking so hard with all those eyes on him, I wasn’t sure if he’d make it to the altar to give me away!

It’s interesting that Father’s Day only became a national holiday in 1972 when President Richard Nixon signed a proclamation declaring the third Sunday in June to be Father’s Day. This was fifty-eight years after Mother’s Day was made a National Holiday in1914 by President Woodrow Wilson.

The earliest known celebration of a Father’s Day was in West Virginia in 1908, shortly after 362 men died in a mining accident. However, it was a one-time celebration and was not celebrated nationally.

The following year, Sonora Smart Dodd, who was raised with her 5 siblings by her widowed father, campaigned in the state of Washington for a holiday to honor all fathers. Her efforts were successful, and Washington celebrated the first statewide Father’s Day on June 19, 1910.

Although the push to declare a national day to recognize fathers had begun, there were obstacles: the Great Depression, wars, fear of commercialism, and the general feelings of men that to honor fathers in the same sentimental way that we honor mothers was not masculine.

Learning from Our Fathers
Today we embrace honoring our fathers, who have always been a powerful influence in our lives. There is a story from the animal kingdom that illustrates the importance of leading by example and mentorship that our father’s and uncles provide.

A group of scientists went to Africa to study a herd of unruly elephants who were running wild, knocking down trees, and generally destroying their environment. The scientists, watching them through long-range cameras, were puzzled by their actions. They had studied other groups of elephants before and had not seen this type of behavior. As they watched, they realized that these elephants were all young, teen-aged elephants. Apparently, poachers had come in and destroyed all the adult male elephants for their ivory.

The scientists hypothesized that with no adult influence, the young elephants didn’t know proper behavior. They wondered what would happen if they brought in adult males as models for the youngsters, so they released some adult elephants into the herd and observed their interaction.

At first nothing happened, and the wild behavior continued. The adult males would raise their trunks and flap their ears. Then they would make loud noises when they were annoyed with the behavior of the young teens. After some time the young elephants, after watching the elder elephants model proper behavior, settled down, and eventually became well-behaved.

We all need role models. We learn to walk and talk by observing our parents. We also learn from them how to behave and treat others with respect. While honoring our fathers on Father’s Day, we can show our gratitude, and what better way than with food! 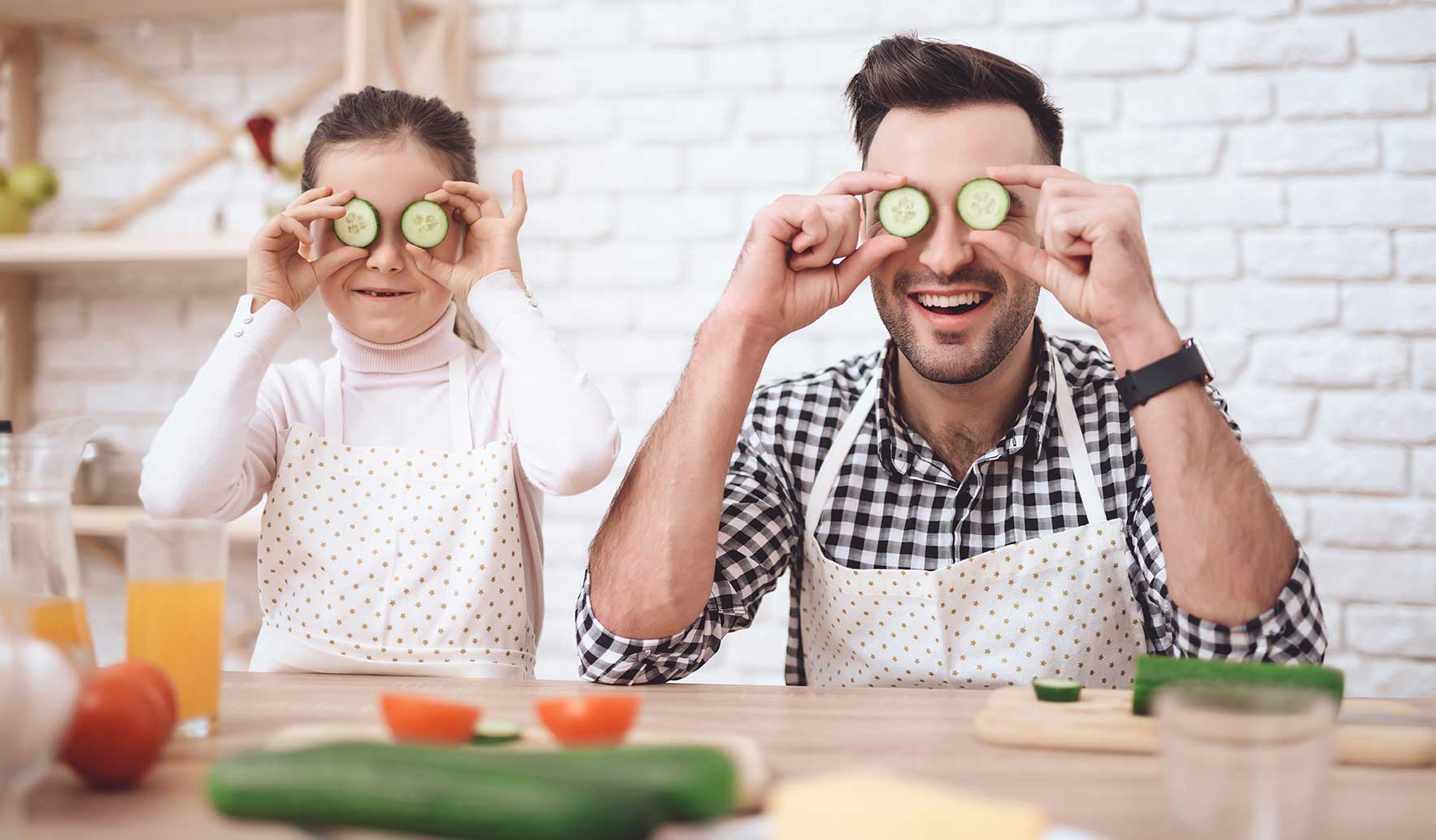 My father loved to eat and would always thank my mother after each meal. I guess I would concur that the adage, “the quickest way to a man’s heart is through his stomach,” was certainly true in my father’s case. If he was alive today, I would honor him by cooking him a wonderful meal with some of his favorite foods.

We hope you find some inspiration from the recipes below, courtesy of Veggie Fest Chicago!

We offer you two menu selections for dinner. The first is traditional American fare and the second a collection of recipes from our Indian menu.

Let’s start with Pasta, made vegan with our Tofu and Pecan Vegetarian Meatballs. Use your favorite marinara or try ours. Marinara Sauce Recipe | Veggie Fest (veggiefestchicago.org) 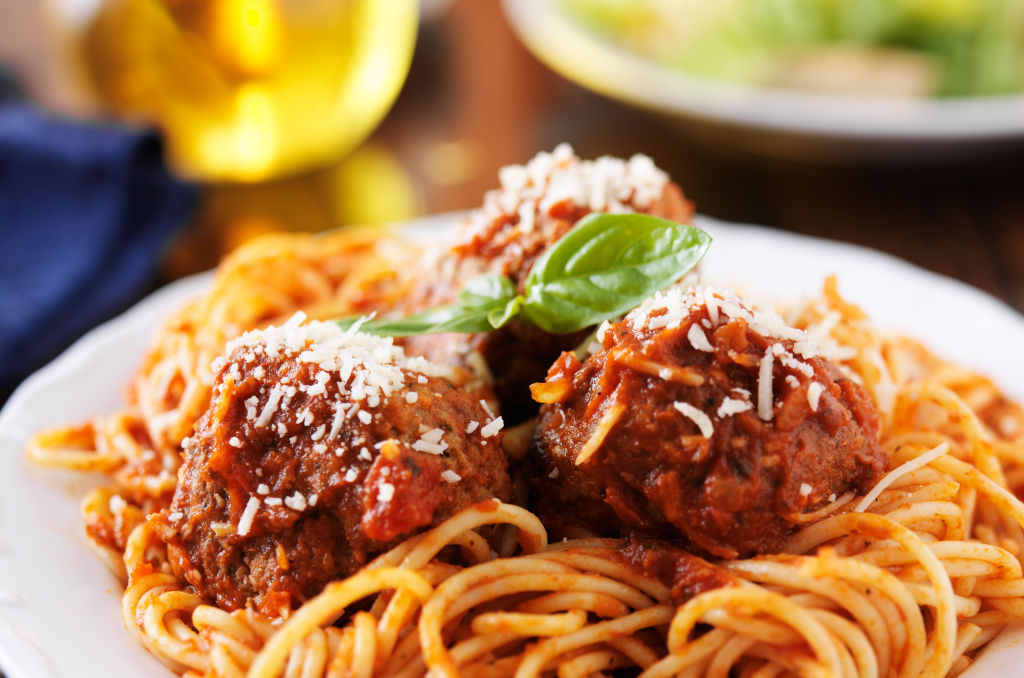 This vegan version of a Caesar salad is tangy and lip-smacking delicious. Use traditional croutons or make it special with our Spicy Roasted Chickpeas. 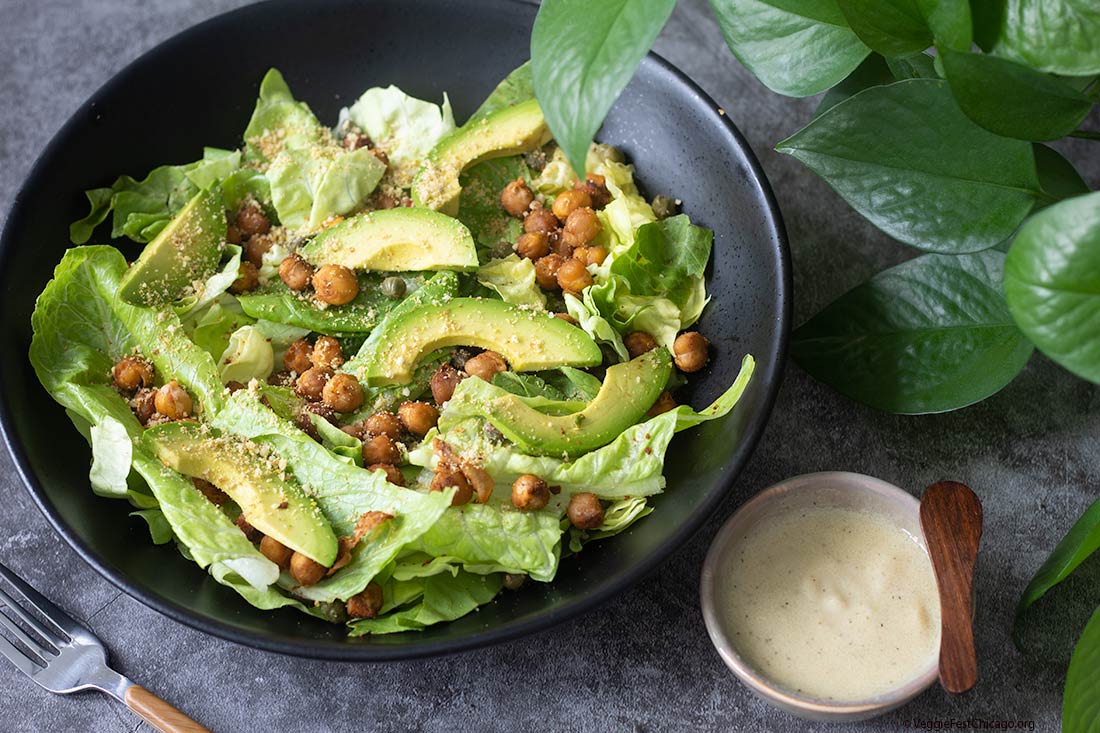 You might want some bread to sop up all of that delicious sauce on your pasta. Consider these quick, crunchy Garlic Pita Crisps. 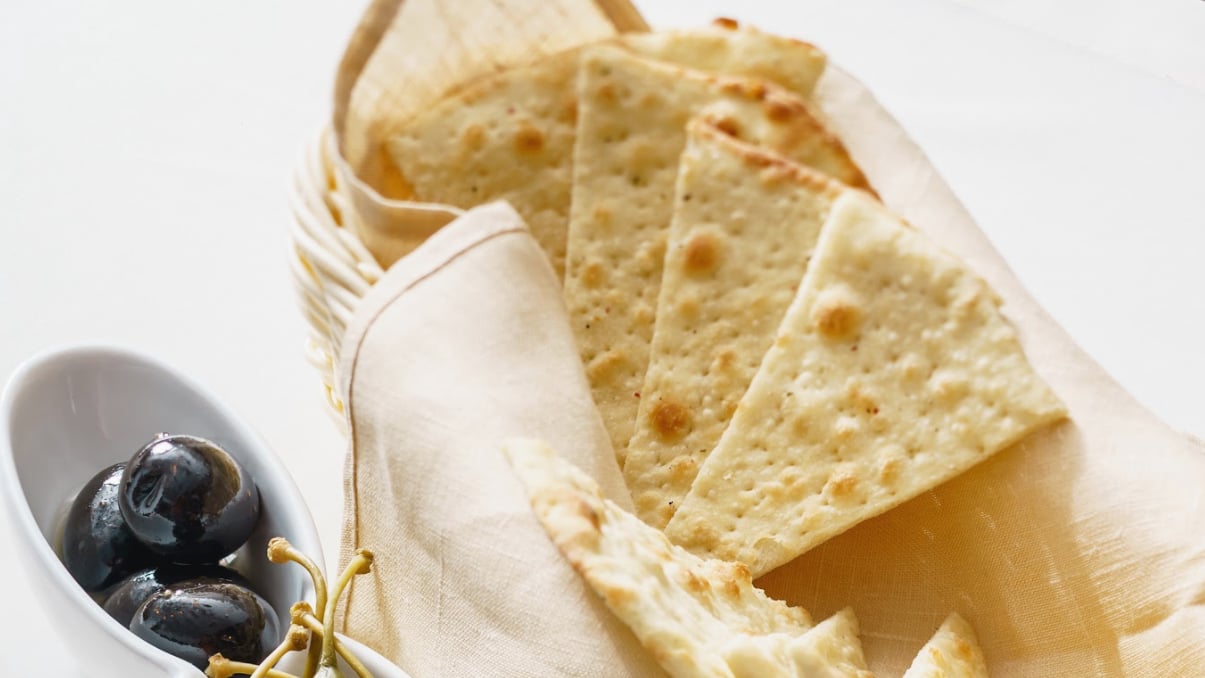 Dad will love this Apple Walnut Cake. The ice cream is optional! 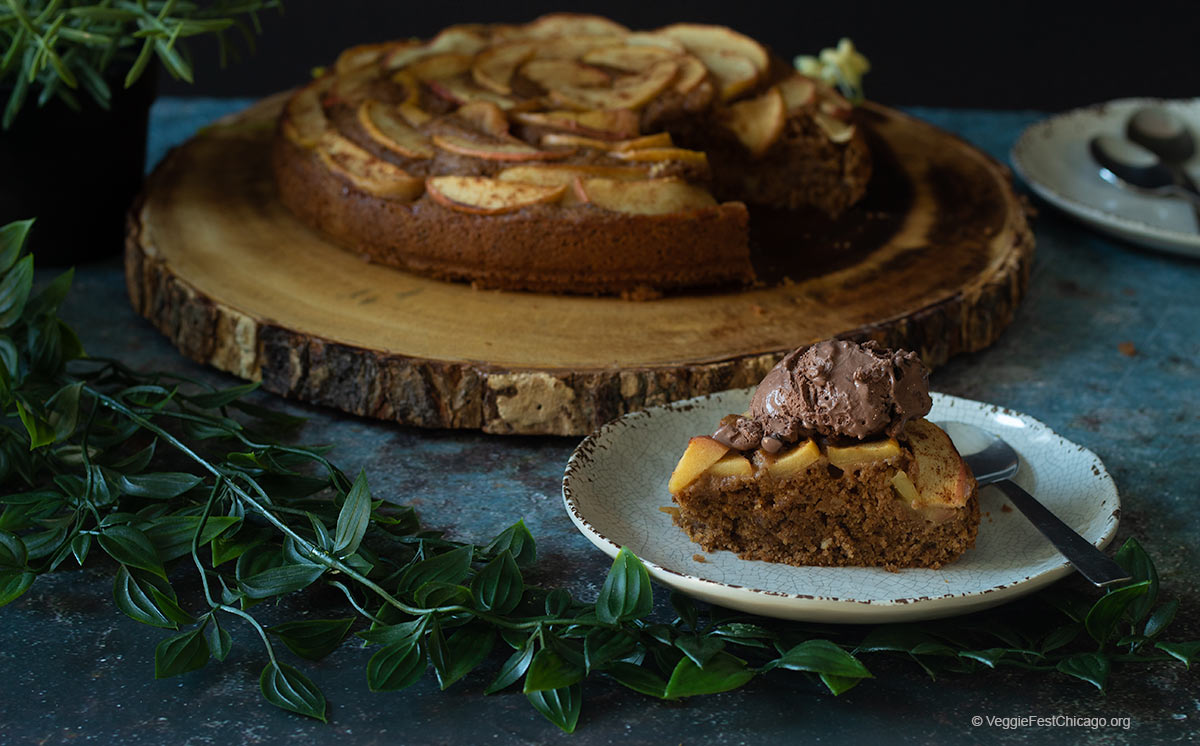 Why not try something different and special for your dad? We have a lot of Indian recipes on our website and these are some of our favorites!

This creamy, flavorful curry will be a great entrée to star in your Indian menu. 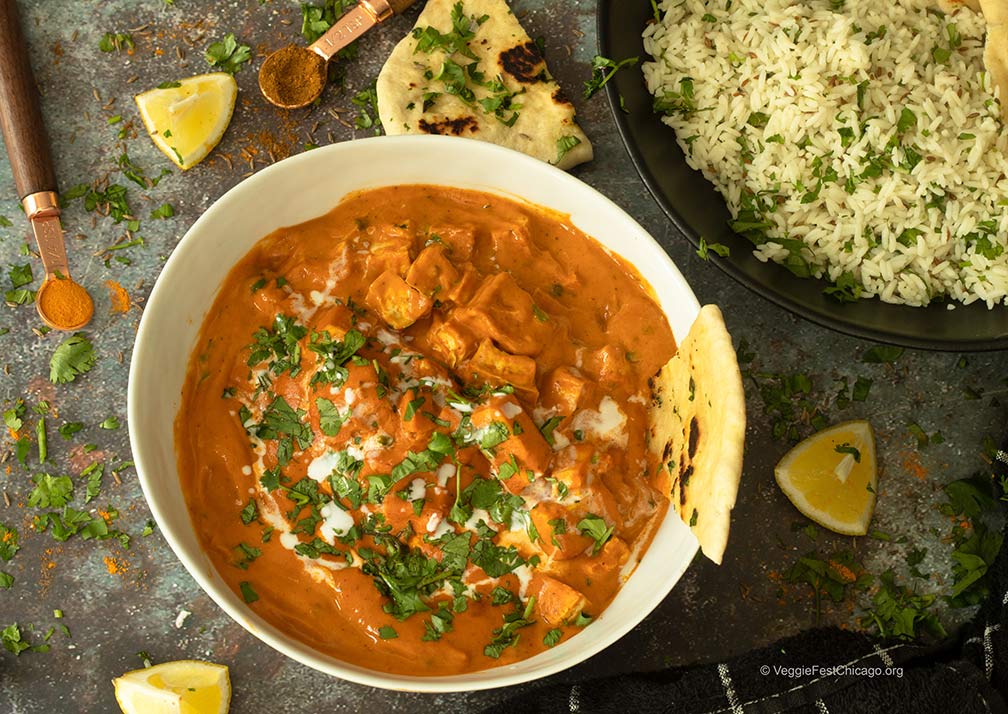 No Indian meal is complete without rice and bread. Here are two recipes that will be the perfect accompaniment to our creamy curry. 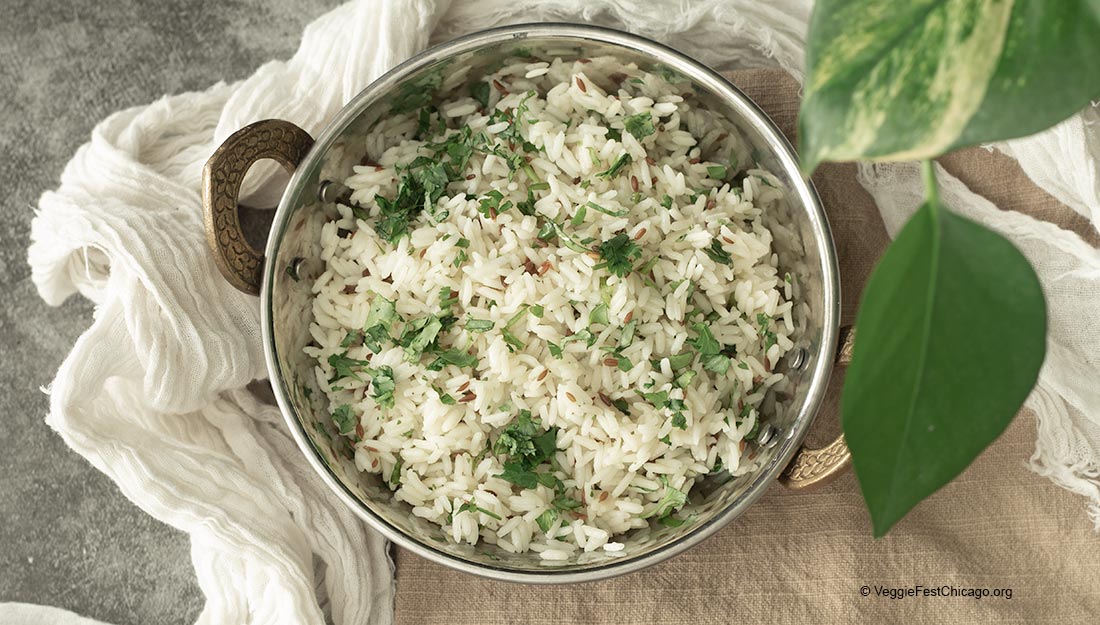 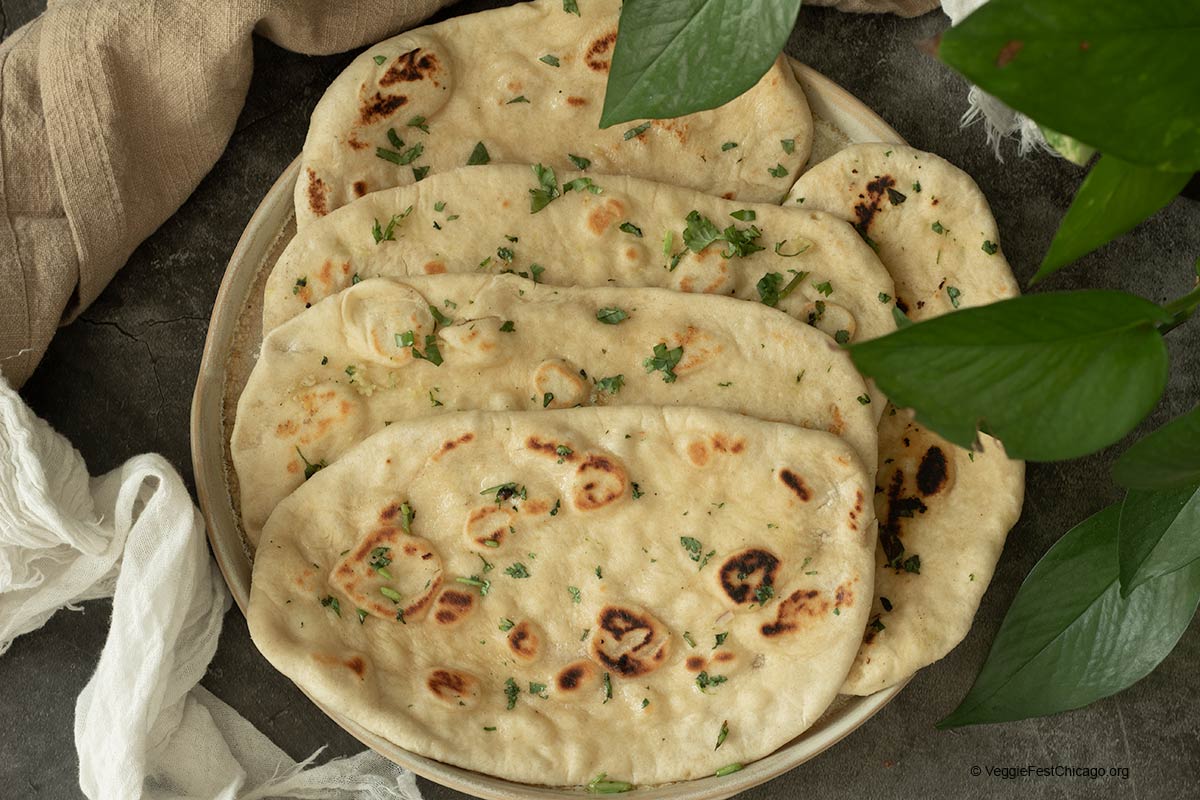 Aloo Gobi Sabzi is a perfect side dish that is touched with turmeric, giving it a golden glow. 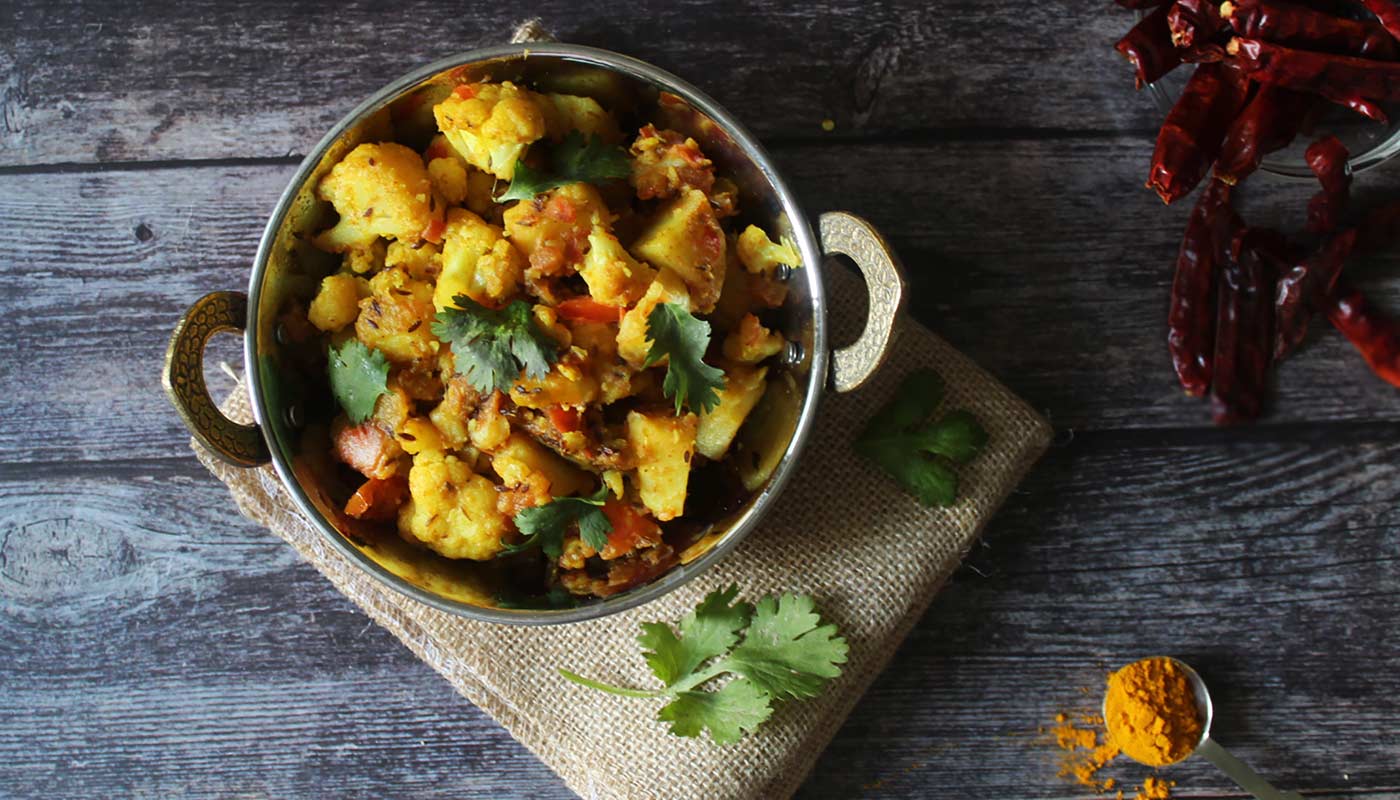 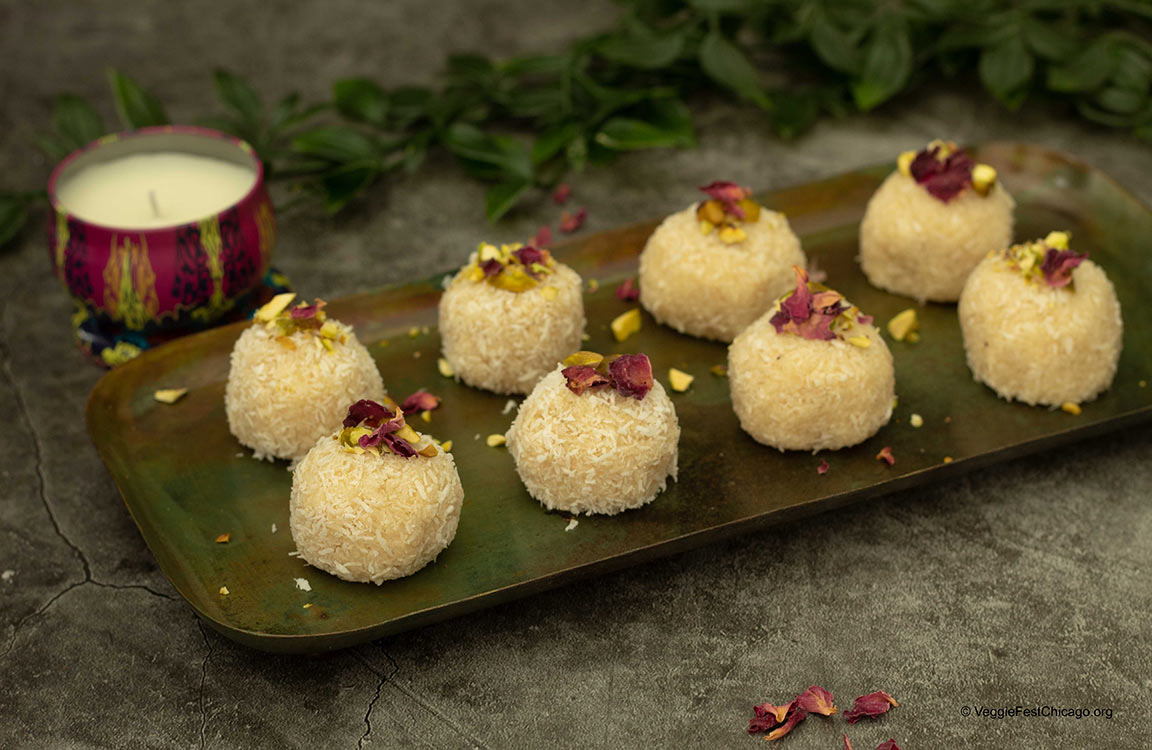 Whichever cuisine you choose to serve your dad, he is sure to be pleased. Happy Father’s Day to all our fathers!

–M.P. from the Veggie Fest Team